The public’s self-governance role includes bringing grievances to the government so that it can address needs, enforce government accountability and assure that laws and rules are constitutional.

We need to address our eroded ability to use this power.

We can do this immediately because no amendment is needed, only court cases, statutes, rules and protests.

The relevant amendment is already in the Constitution.

“Congress shall make no law…abridging…the right of the people…

to petition the Government for a redress of grievances.”

“How could the Preamble have been invalidly amended so long ago and just stayed that way? How could the Apportionment clause have been? Didn’t people complain?”

Although no petition can be promised success, Amendment I can’t protect the right to petition the government if a Senator or Representative can refuse to introduce their constituents’ petitions into Congress. This also violates Amendments IX and X.

Nor do the public’s grievance procedures in the Executive branch, the judiciary or most states come close to what Amendment I requires. These failures sever the legislative self-governance channels, giving government officers power over what the public can have addressed without lobbying (which is not in the Constitution!).

They also shut down the public’s ability to oversee government conduct,

and to ensure that laws and policies are constitutional.

People are frightened by the question, "What if government simply refuses to be accountable to the people?" It's called the problem of anarchy.

Pure anarchy, life without government, is a fantasy. Pure anarchy works until two people disagree. Some form of governance kicks in then automatically.

Anarchy modified with hierarchy, the law of the jungle, is the most primitive form of government. The erosion of the public's political oversight has all but given government officers the power to do whatever they want for the plain and ugly reason that they can get away with it. If we do nothing, we could soon find ourselves wrestling with this, a secular form of the royalism we defeated in the Revolution.

for their own purposes.

Each of the related problems in this subsection has become serious in our era.

Do we have to put up with them? No. Americans can't. We can handle this nonviolently now, using the system we have: retaking Congress temporarily by reclaiming primaries from the two-party system, then passing and ratifying the amendment in the window period. Doing things the right way still takes a few years,

but it's the only way that won't create other problems.

The special problem of extraconstitutional power - power we the people didn't delegate - is covered in the next subsection, Help Lasso a Runaway Executive. 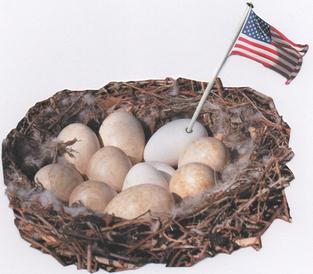